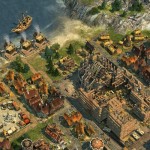 Many strategy games are resource battles that can be summarized as ascending or descending graphs. Fighting against the numbers is not fun stressful.

Picture a typical session of your favourite video strategy game. It is most likely one of two things: either a constant click-fest or a long, drawn out affair until one final battle after which the defeated player quits the game. I do not like the first version, since most of the time I play to relax. And the second one is problematic on several levels. As you can see from last week’s entry, I like to keep players in the game. The long build-up does that, but for a long an uneventful time, after which you lose everything without a chance to come back.

It’s all in the numbers. The deciding numbers in the first scenario are Actions Per Minute, while the second scenario is decided by Resources Per Minute. Both are systemic to either Real-time- or Turn-Based Strategy Games. For the record, I put the ANNO games into the second category because of their long playtime and many delayed effects. So, if you ever wondered why the series is such a bad RTS: That’s why. It is not designed to be one. 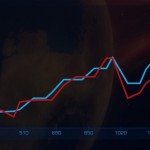 Back to the numbers: Ascending graphs are used for games with a build-up phase. This phase transforms the available resources of the map into combat resources that can be used against opponents. Usually, all players begin with the exact same resource setup and means to transform them. Tactics is applied when it comes to timing and positioning.  You can defeat a more advanced opponent by refusing to go heads on and harass him down to your resource level. But you have to invest lots of actions and good timing to get that down right.

What it boils down for many strategy games, or at least lazy gamers, is: Stacks of Doom. Be it the one undefeatable uber-hero in Heroes of Might & Magic, the single killer-stack in Civilization, or all your warships in ANNO. It all ends in one single confrontation that decides the war. Far more relaxing than constant tactics, but not guaranteed to satisfy. 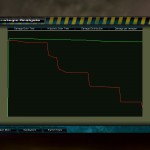 On the other end are descending graphs for games that skip the build-up. These are usually more focused on tactics and army composition. Most use point values for units to make sure all players start with the same resource strength. Victory goes to the player with more units standing at the end. This puts the whole gameplay around one large negative loop: Whatever you do, you will lose resources, and they are not coming back.

These make for some interesting matches. Both players can see what they are up against and plan accordingly. Yes, there is still a breaking point where one side decidedly got the upper hand. But at least to me, surrender in these games comes more easily and with more satisfaction for the winner. Maybe that is because of the absolute vision and battle state knowledge (Note to self: check hypothesis with next concept). There are a lot of tabletop examples like Warhammer, Battletech or most famously, Chess. But unfortunately, few videogame versions. 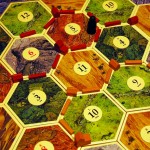 Ok, you got me. Nothing new here. Just wanted to express my need to boil down games to systemic graphs and numbers. Because these are necessary to answer some of the questions I ask myself when analysing different games: What type of resource structure does it have? What are the deciding factors for victory? Why do players quit minutes after starting a game session if they did not have a perfect start? What can I do to keep players in the game and offer both, the winning and the losing player a fun experience?

Here are some common answers to the last one:

A game should not rely on one dominant stack-of-doom strategy. That includes making other strategies both viable to win and easier to employ, without giving players carpal tunnel syndrome. And finally, there should be more PC games with descending strategies. Go for it!