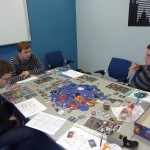 Two down, two to go

Strategy games can take a long time to play. And if you’re not careful, you may end up spending most of that time watching your friends duke it out over the remnants of your former empire.

Have you ever been in that situation? You arrange a board game night with some friends, and plan ahead to get enough players and time to go for the really involved, large-scale strategy games. Anything from Avalon Hill or Fantasy Flight will do.
You set up the board, order pizza and make your first moves… only to get immediately overrun by three of your former friends. “Sorry, but we figured we cannot allow you to tech”, “Hey, rushing is a viable strategy” or “Come on, you know that game so well, we had to team up to stand a chance” are the usual comments that accompany your quick defeat.

The good thing is: They are probably right. Playing with experienced gamers adds additional meta-game levels around the table. And you just lost the mind game. Next time, try not to be so smug about former victories, keep a low profile in the start phase and have enough beer at hand to bribe your neighbours.
The bad thing is: You still have to spend the next hours either watching as your usurpers finish the game, while contributing only pretzels and snarky commentary. Or you could call it a day and go home. Or watch TV if you are already at home.

A game of bones 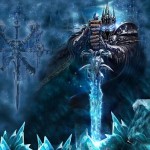 From zero to zero degree hero

It is an unpleasant situation, and many gaming groups try to avoid it. When it is more about a friendly get-together than the competitive challenge, they are well advised to check out more Euro-style games. But for the hard-of-core who want to have it both, deadly challenge and keeping players in the game, I suggest a new feature: Zombies!

Some time ago, I constructed a little board game on that concept. Essentially, it was a fantasy war game with players gathering resources, recruiting armies and battling each other over the crown. But there was a twist to that: As long as no one was on the throne, the dead would refuse to stay dead. And every battle that was fought between players was increasing the strength of the undead army. Finally, players could be defeated or voluntarily abdicate their right to rule the living. In which case they would gain new victory conditions and take control of the undead hordes.

This concept basically boils down to creating and including a second game mode into the first. It is kind of a loser’s bracket where defeated players can team up to make life harder for the remaining competitors and exact revenge on those who defeated them in the first place. 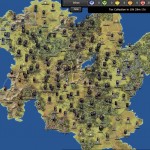 Already got strategy and undead...

Does any reader know of a game that already uses a similar feature? I’d very much like to hear about it. It seems unlikely to me because of one large hurdle to execution: Bad cost/effort ratio.
Implementation would require assets and balancing for two separate game modes, only to cater to a very small audience. As a designer, you will fare better by concentrating on your core game and make the original “go for the crown”-game as enjoyable as possible.

But maybe, just maybe, you got some spare time and resources to create an additional set of rules for your game. There are some solid video games out there which could fit a “game of bones” feature snugly onto their existing mechanics. I’m looking at you, Blight of the Immortals.

As for board games, some general rules could be applied to anything from Twilight Imperium to Axis and Allies. These are not tested, only starting points for first prototypes: 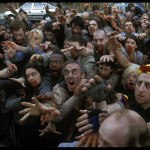 There are a lot of problems with this draft. The rules and balancing need to be better tailored to their core game. And of course, the main question should be answered: Is it fun?
At the moment, this feature will probably just create a more tedious endgame for all players for the sake of keeping them at the table.

Still, I like the basic idea. So … I’ll just put it out there and come back now and then to iterate. It’s also a pretext to start digging at core strategy game mechanics, to exhume their bones and expose their graphs and digits. There is some un-life left in this feature, it just needs more brains-power to rise to its promise.

Meanwhile, try these rules: Whoever gets defeated in a strategy board game, may call himself “Hand of God” and remove some random units from the board each turn. Yes, that includes a lot of crying and throwing the pieces around the room. Very old strategy, guaranteed not boring. And who would want to play with those backstabbing sneaks ever again, anyway?